Afro Style Ultimate Technique: Finally something to look forward, seeing Katsura fighting a serious fight feels fresh. Interesting funeral with the rocks as part of it. My biggest gripe with the series is that it’s too episodic at times where you can’t keep up or don’t care to, too many hit or miss mini arcs. Did Shinpachi really just take a hit from a guy as strong as Housen? Is it any good? That man and that smile If he were done for good we wouldve seen his flashback.

Had a lot to catch up on Chapter Would have liked to see Oboro with the other disciples. Shinpachi’s story was pretty good, till Kagura butted in, but that was still great and hilarious! I see where she’s coming from: Who will knock who out first!?!?! Kinda do wanna see a full fight between Umibozu and Kamui. Does gender even apply to old hags? The live-action Gintama film is currently filming in Japan with the goal of theatrical release. Gotta love the running gag with this glasses.

The manga is shitting on everything Jump has made the last year. 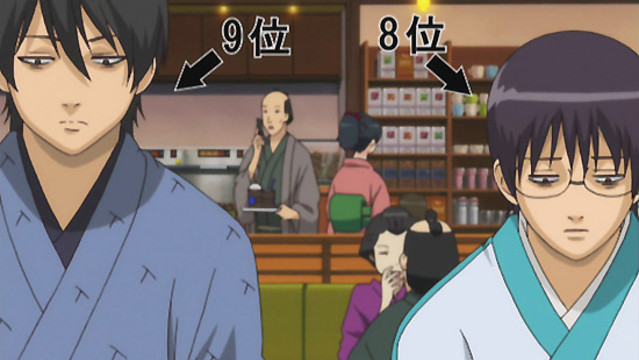 Interesting story behind him and Nobume though. Oh well, time to move on with Gintoki, the fight should be fun.

Eh, it was a predictable plot-twist. The Toriko reference was funny, as for the manga goes, dont see Sorachi killing them he is very Oda when it comes to death. Oh Ginyama, I almost forgot about Oboro, He might still return but will become a full cyborg ala Darth Vader, Utsuro probably picked him up after the Shinsengumi and the rest of the guys were running away.

Kamui is a pretty lame character. Giving another lecture to Kamui, but Kamui is probably just gonna ignore Gin. You can’t make him a complete sociopath the entire series then turn him into a momma’s boy and go redemption route.

Ah the ketsunoana pun. Of course he’d have that. That Mr Bean reference was the best part.

IDK why there isnt an anime discussion section.: The salute was nice and Otae with Kondo interaction was as well. I really hate Kamui, never understand why people like him. Sachan is gonna suffocate him like that hahah. Farewell Shinsengumi Arc begins! The Epiisode Heavenly Kings are back! Karma heheh when I met that man, I turned weird. Do yah still don’t care? I’m glad Shijaku realized it was Tendoushuu pulling the strings and not the earthlings. Gintama Season 3 Episode — Afuro and Wolfro heheh sleeping and drooling.

Blaming Tendoushuu since they control the gates.

Kinda do wanna see a full fight between Umibozu and Kamui. Oh man, the Shogun’s regual gags are back! Chapter heheh Sakamto the spit translator. Gin nosebleeds as a result of checking himself out.

Did Shinpachi really just take a hit from a guy as strong as Housen? Does gender even apply to old hags? I think this series is siginifcantly more popular than Toriko in Japan, but the weekly rankings are abysmal.: Wanting to kill your sister because your dad killed your mom, even though your mom was living a meaningless life before?

My thoughts have changed again for Sasaki.

I want one of those machines! It would have been nice to at least got names for the other kids of Shoyo’s class that are implied to have died in the war to save him. Shoguns of Light and Shadow The Shogun episoxe. Oh gosh, what did Kondo do to it.

I think he is the strongest human shown, but to be fair. I haven’t been feeling these last few episodes. The bad things are: Then the fight between Kissaime and Takasugi felt lackluster. Very predictable, Umibozou is losing, and Gintoki and the rest of the disciples are gonna wreck those people.

I’m seriously pissed off at this shitty arc: Last farewells and meeting with remaining heroes in Edo. I didn’t get the mention. I like the manly Hyakka. Void; Listen to this while reading the chapter. Nobu Nobu joins in.